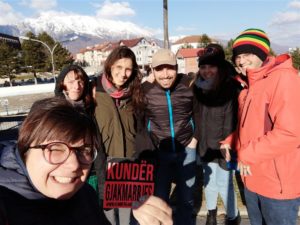 Present situation
At the end of the month, a bomb, hidden in a package inside a private garden, exploded in the hands of a boy, killing him. Allegedly, the murder is related to an event happened in March 2016, when the victim’s brother shot two cousins, injuring one and killing the other.
Around the same time, a murder and an attack were committed. A man was killed in his car by a neighbor, apparently for a dispute that had occurred in the bar of a village. In the car there was also the 10-year-old son of the victim, who remained unhurt. In Korça (southern Albania) unknown people shot at a man’s car, fortunately without causing victims; his son thinks it might be a revenge for a robbery he had committed in 2008.
In the middle of the month, a man got conditional release, after he had been extradited from Italy in 2014, where he had been previously sentenced to life imprisonment. The judge stated that the alternative measure to detention was granted due to his good conduct and the relationship he had created with the victim’s family. It is interesting to note how, although not explicitly mentioned, a form of restorative justice has been applied to this case.

Activities
A family manifested their will to positively work out their pain, caused by the violent loss of their daughter, by showing us some photos of her. We glimpsed in their eyes the serenity of those who are understanding that feelings of hatred, fueled by dwelling on the past, causes them more suffering.
Between February and March, we received the visit of Father Gianfranco Testa, a Consolata missionary and founder of the University of Forgiveness. Together we met 8 classes of a high school and 3 oratories, bringing them a real and repeatable example of forgiveness. Father Gianfranco emphasized that forgiveness is a gift that one makes to himself, different from reconciliation which, instead, involves the meeting and the agreement with the other. The students showed interest by intervening and asking questions, including how it is possible to forgive a murder committed for blood feud reasons. Father Gianfranco Testa answered with some simple but meaningful words: forgiveness does not mean forgiving the harm done to us, but it consists in regaining our self-confidence and dreams for the future, in a manner that what hurt us will not run our lives. Finally, these meetings offered an opportunity to present and spread the “Kundër Gjakmarrjes” awareness campaign. This initiative was welcomed positively by the students.

Relationship with institutions and civil society
At the beginning of the month, we met the Director of the Schools Office of the Italian Embassy. We discussed our work with the Director and made plans for a possible cycle of meetings in the schools where the Italian language is taught.
We also met two OSCE representatives interested in the protection of the human rights violated by the blood feuds phenomenon. They committed to do everything possible to support our work. Finally, we met the Albanian Ombudsman to invite her to our Side Event which will be held at the United Nations in Geneva during the next UPR (Universal Periodic Review) of Albania.

This blog is written in the framework of the project “Alternative dispute resolution and legal aid to solve blood feuds” as part of the subgranting scheme of the project The Civic Engagement for a Functional Judiciary System and Access to Justice in Albania, funded by the European Union and implemented by Save the Children and the Centre of Integrated Legal Services and Practices.