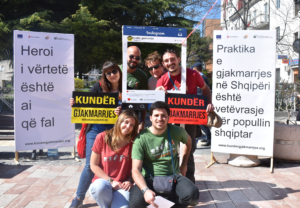 Present situation
Around the 15th of March, the newspapers reported about a trial in which are involved three young people investigated for the murder of a boy, occurred in 2017. The victim’s parents declared that “if the judicial system is not going to work, then the Kanun will work”; furthermore, they affirmed that they are not asking for money because it is impossible to find the price for their son’s life, “we will not restore our son’s value through money”. Among the Albanian population the distrust in the judicial system is still relevant and often people can be more confident in private justice.
In the same period, a 26-year-old man, probably known and involved in the organized crime, was killed in front of his house. Even if the investigations are still going on, is almost certainly a blood feud’s case caused by another murder for which the victim had been investigated and found innocent in 2017.
At the end of the month, a man found explosives under his car; his brother was killed ten years ago and this failed attack is probably due to a conflict situation that has been affecting his family for years.

Activities
At the beginning of the month, the volunteers were invited to a forestry professional school where they presented the work of Operazione Colomba in Albania and the raising awareness campaign “Kundër Gjakmarrjes“. It is important and positive to notice that teachers and educators have been committed to knowing more about the overcoming of the blood feuds phenomenon.
In the middle of the month, some volunteers went to visit families in blood feud in the mountain area of Tropoja. They met a woman who told them that she is suffering to know that the man who killed her son, due to a vendetta matter, went out of prison and returned to live next to her house. Nevertheless, she does not want the death of this man, she only wishes that he will move away. Her words are always a source of inspiration for the volunteers.
Furthermore, the volunteers spent a very nice afternoon participating to the birthday party of a nine-year-old child, whose father is in jail due to a blood feud.
This month the volunteers organized a demonstration in the pedestrian area of Shkodër in order to carry on the spreading of the “Kundër Gjakmarrjes” campaign. During this event, some people stopped to talk about their personal involvement in blood feud cases.

Relationship with institutions and civil society
At the end of the month, the Italian Embassy invited Operazione Colomba’s volunteers to a meeting, inside the framework of the exhibition: “L’Eterno Femminino. The representation of the Albanian woman from the twentieth century until today”. The volunteers contributed with a brief analysis of the role of women in Lekë Dukagjini’s Kanun in the past and the present.

This blog is written in the framework of the project “Alternative dispute resolution and legal aid to solve blood feuds” as part of the subgranting scheme of the project The Civic Engagement for a Functional Judiciary System and Access to Justice in Albania, funded by the European Union and implemented by Save the Children and the Centre of Integrated Legal Services and Practices.