A Crowd Against Blood Feuds > Press release > Operazione Colomba: truth and justice for the victims of blood feuds 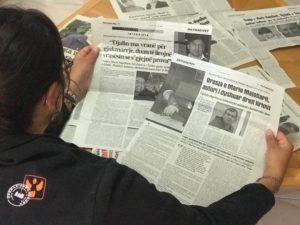 “We call on the Albanian Institutions to do everything possible to bring those responsible for Mario Majollari’s murder to justice and finally give his family an answer. There is no peace without justice”.
This is what Operazione Colomba, the Nonviolent Peace Corps of the Comunità Papa Giovanni XXIII Association, declares in a note with regard to the murder of Mario Majollari. According to Albanian journalistic sources, the only indicted, Kastriot Gjuzi, was acquitted by the court due to lack of evidence. In 2018 on April 10th, 28-year-old Mario Majollari, repatriated from Sweden where his application for international protection had been rejected, was killed in Tirana on alleged blood feud reasons, as his father had killed Ilir Gjuzi, Kastriot Gjuzi’s brother, in 2000. Now the questions are who killed Mario Majollari and why.
This case brings the attention back to the case of the murder of Marie and Kol Qukaj, killed in 2012 on June 14th, in Dukagjin, whose perpetrators have not yet been identified. Also in this case the reasons for the murders seemed to be due to a feud between two families. Two years after this double murder, some relatives of the victims tried to take revenge, resorting to private justice.“It is extremely important to listen to the requests of the victims’ relatives of a murder, in order to avoid the prosecution of acts of private justice. When State justice takes its course effectively and efficiently, the desire to resort to ‘do-it-yourself’ justice diminishes. Also in this way vendetta can be stopped and thus the feuds that derive from it” states Antonio De Filippis, coordinator of Operazione Colomba.
Since 2010 Operazione Colomba volunteers have been present in Albania to promote the overcoming of the blood feud phenomenon.