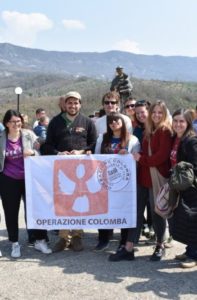 Present situation
During the month of April, we recorded some cases of injuries due to blood feud phenomenon. In the middle of the month, a village chief was injured because of a previous property-related conflict. The dynamics of the episode shows the abuse of the Kanun and the misuse of its practice. Indeed, the man was hit by a few gunshots while he was on the balcony of his house, although the domestic dwelling is a traditionally sacred place, where taking revenge is forbidden. Furthermore, in April, a man, who had arguments over property issues in the past, was injured. His wife said she is very scared and in danger because her family had previously been threatened and attacked.

Activities
At the beginning of the month, we organized the usual annual trip with the women group at the Saint Anthony’s Sanctuary, in Laç. After attending Mass, the women listened to the comforting words of Allegra, a woman who faced the loss of her daughter with courage and mindfulness, and founded an association in her memory. Allegra told Albanian women about her experience as a mother, a role that is not ended with her daughter’s death, because when a woman plays that role she keeps it for life. She also invited women to focus on the positive memories of their loved ones. Allegra’s words deeply touched all women, in particular a girl, who usually has a tough attitude, was moved by remembering her sister.
Thanks to Allegra, we also supported another girl, who lost her sister because of a blood feud, in the re-elaboration’s process of this mourning.
At the beginning of the month, we participated in the first anniversary of the death of a boy, going to visit his family and taking part in the intercession Mass. During the homily, the priest said very strong words, condemning the use of violence as a means of resolving conflicts. He went so far as to declare that the boy’s murder was the result of pressure from the whole community, since in Albania it is difficult to defuse the mechanism by which disagreements degenerate into wounding or murder. The family thanked us for standing by them and invited us to visit them again.
Finally, just before Easter, we delivered a letter, from an Italian missionary, to a family in blood feud in order to give some suggestions so that its members can carry out confidence building gestures to promote reconciliation with the opposing family.

Relationship with institutions and civil society
On April 8, we went to Tirana to meet MP Vasilika Hysi. The meeting was fruitful: we informed her of the main issues related to the blood feud phenomenon and of our work aimed at fighting this practice. The Deputy has shown to be aware of the gravity of this social plague and to be willing to collaborate with us in the future in different ways. We also handed her some stickers to spread our “Kundër Gjakmarrjes” campaign.