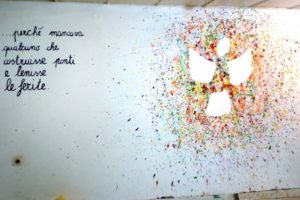 After 10 years of nonviolent intervention, Operazione Colomba is going to close its presence in Albania.
This decision, not taken lightly at all, is the result of careful considerations and observations that were made starting from the positive results achieved during these years and evaluating the living conditions’ improvement of the families that Operazione Colomba took care of. Paths for conflict and grief processing helped many members of the families affected by this social plague to overcome, little by little, the pain and anger felt for the injustices and human rights’ violations suffered. These paths supported families to abandon the intention to avenge a relative’s murder, promoting the creation of a positive future dedicated to life and children education, in order to offer them better opportunities.
In addition, the mediation processes, aimed at facilitating the rapprochement of the clans involved in the feuds, supported the families related to those who committed a crime for blood feud reasons, to realize confidence building gestures, respecting the pain of the bereaved ones. This type of action reduced tension between the feuding families, helping the injured party to reconcile with its emotional wounds and the counterpart to get out of self-isolation they used to live.
Civil escorts (or nonviolent accompaniments) protected many men, women and young people involved in blood feuds, and therefore in danger of being targeted for vendetta, during their daily errands. Furthermore, civil escorts to prison, hospitals and certain family circumstances guaranteed these people the access to health care and the opportunity to nurture ties with their loved ones.
The accompaniments proved to be particularly useful as leisure activity for trips to cultural and religious places. This activity helped family members to get out of the compelling social context they lived and to “recover” from their oppressive daily situation. In general, these accompaniments encouraged, over the years, family members to go beyond the narrow-mindedness context they used to live and to gain self-confidence in order to face again the world outside. The activity boosted them to overcome fear and to catch the opportunities to improve their living conditions which, especially for women, meant to look for a job and then get it in order to support their families.
Furthermore, the activities with the women group (a group of women involved in blood feuds), created a place to meet each other and to talk about their family situations, especially through trips to holy places and by listening to other women who chose nonviolence, forgiveness and reconciliation in conflict situations.
Finally, activities with the youth group (a group of young people involved in blood feuds) created opportunities for growth and empowerment. Meeting persons who talked about their reconciliation experiences and training about nonviolent conflict management offered these young people a new different model to respond to the conflict situations they are involved in. Moreover, the futsal football matches and the trips out of town represented a further safety valve, as well as an opportunity to strengthen their friendship.
All these interventions were realized thanks to the direct sharing with the families involved in the phenomenon which, as some members of the youth group often told us, encouraged them to open their mind and their vision of the world.
The educational activities carried out in schools, oratories, parishes and in the main aggregation centers positively influenced the compelling context that tends to marginalize these families, putting on negative social pressure that pushes them to take revenge.
Awareness raising activities (monthly demonstrations, national campaigns, drafting and dissemination of reports on blood feuds phenomenon) were addressed to civil society, local and international institutions (in particular the UN, EU, OSCE) in order to make more visible the phenomenon, urging the Albanian authorities to recognize it.
Secondly, the awareness raising activities stimulated the local population into using an active civic behaviour, spreading a culture based on respect for human rights and promoting useful suggestions on the effective ways aimed at combating the blood feuds phenomenon.
During these years, Operazione Colomba also acted as a ‘bridge to dialogue’ between the families affected by the phenomenon and the institutions, bringing to the attention of the latter the requests of this social plague’s victims. On the one hand, the round tables and meetings held with local authorities and associations pursued the goal of creating a joint strategy to eradicate this practice. On the other hand, the publication and dissemination of documents made possible to report to the Albanian institutions, the European Union and the United Nations the human rights’ violations caused by the phenomenon. This advocacy activity put pressure on local representatives, urging their commitment to promote concrete actions to combat the phenomenon.

Prospects
The closure of Operazione Colomba’s presence in Albania does not imply the end of our commitment to go on combating the blood feuds phenomenon. All the activities carried out in recent years to combat this practice represent a set of best practices to be conveyed to local authorities and institutions in order to continue promoting the overcoming of the phenomenon.
This is why, through Trentino con i Balcani Association (ATB), meetings and workshops will be held in the next months with the Albanian institutions where Operazione Colomba will disseminate a Toolkit, a short operating handbook containing the practice that turned out to be more effective at overcoming this social plague. The activity will be realized in order to increase the autonomy of action, aimed at eliminating the phenomenon, by local authorities.
Furthermore, the missionaries of the Comunità Papa Giovanni XXIII Association – which has been carrying on its presence in Albania by shelters for people in need and solidarity interventions – will go on monitoring the families affected by this problem.
In general, the phenomenon will continue to be monitored through the collection of online data and the publication of information on our site and our blog ‘Kundër Gjakmarrjes‘.
Finally, the awareness raising activity will be carried on by Kundër Gjakmarrjes Campaign, which will continue on social networks. We invite all those who care about overcoming the blood feuds phenomenon to go on posting photos with the sticker Kundër Gjakmarrjes.

It is important to stress that the decision to close the presence – leaving some important activities in the hands of the Comunità Papa Giovanni XXIII Association’s missionaries and aiming for a handover with the Albanian institutions – is the result of positive outcomes achieved in many years of intervention, especially in northern Albania.
This does not mean that the phenomenon was stopped, but it means that the path taken by Operazione Colomba, in these 10 years, can show a direction to follow, in order to overcome this practice, throughout the country.

A huge heartfelt thanks goes to all the volunteers, the donors, the associations, the organizations, the religious and institutional representatives who have supported the project over all these years, making all the activities possible and nourishing its soul.
Operazione Colomba – Team Albania