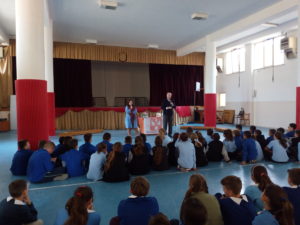 Unfortunately in October some cases of violence led to the wounding and to the death of some people. A former head of a village from Burrel area shot other men after a fight in a bar, killing two municipal workers and a third man in the club. The family of the culprit said they felt great shame for this gesture and moved away from the village where they lived for fear of vendetta.

At the end of the month, in the suburbs of Tirana, a man tried to avenge the murder of his two brothers, which took place in 2014. According to the Police, the offender hit the brother of his brothers’ murderer and is now a fugitive. This act of private justice involved, therefore, an innocent and was carried out, despite the murderer being sentenced to life imprisonment for the double murder of 2014.

This month, a case similar to the latter was recorded, which ended with the arrest of a fugitive. According to sources, in 2014 the fugitive had tried to avenge the death of his brother, killed in 2011 in the mountain area of Dukagjin.

Also this month we visited blood feud families in the area of Shkodër and Tropojë. In the middle of the month, in particular, we hosted Father Gianfranco Testa, a former Consolata missionary, who helped us to bring words of comfort and forgiveness to the heart of those who still suffer because of blood feuds. His presence, during the visits to families in conflict, supported and promoted the paths of restorative justice we are carrying out. We also visited with him two schools and a boarding school, where we organized some meetings with students aged 11 to 25, on the issues of forgiveness and reconciliation. The meetings were aimed at raising awareness among young people of the use of alternative dispute resolution to solve conflicts and feuds. Talking with these youngsters, who are the future and the true engine of Albania’s change, has been positive and important. The meetings were also an excellent opportunity to get in touch with the Salesian Sisters, the “Sacro Costato” Missionary Sisters and the Angelic Sisters of Saint Paul.

This month we have also accompanied some families to visit their relatives in prison. In particular, a woman thanked us because our presence helps her not to feel alone.

Furthermore the collaboration with a lawyer from Shkodër continues, supporting us in cases where professional legal advice is required.

Relationship with institutions and civil society

At the beginning of the month we met an Imam from Shkodër to get in touch with a Muslim family, that lost a relative because of a blood feud. We also contacted the German Embassy to propose a meeting of mutual knowledge for a possible future collaboration.

In addition, in order to strengthen the collaboration with the Italian Embassy in Tirana, we met its First Secretary to update her on the work done so far and to discuss the short and long-term projects of Operazione Colomba in Albania.

Finally, we had the pleasure to meet two operators of the NGO “Gruppo Umana Solidarietà” (GUS), who asks us to collaborate on a project to raise awareness against violence in the area of Shkodër.

This project is financed by European Union, Save the children and CILSP.